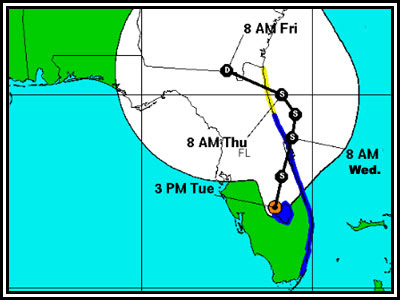 The diagram above shows the projected path that tropical storm Fay is expected to follow for the next few days. How accurate it is, is hard to say. Fay was supposed to come through the Daytona Beach area starting tonight and hit hardest around 2am. Before that ever happened she shifted and headed out towards sea. As you can see now, Fay is projected to double back and land further up the coast. We’ll find out tonight if schools will be in session tomorrow. We’re still supposed to have high winds and rain through Wednesday.

Oh, if you’re wondering how the day at the shelter went, it was pretty uneventful. We opened on time at 10am. Usually, when we open a shelter, there are bunches of people waiting to get in. Not today. The first person didn’t arrive until almost eleven. At 12:30, only six people had come in. At 2:30pm we were closed down and people who still wanted shelter were sent to a new location. So the end result was no injuries, no property damage and only one story. [One of the people who came to the shelter ended up getting arrested. When the man signed in, a Deputy ran his name and it turned out he was wanted on an outstanding warrant.] My guess, is the man won’t be worried about shelter for a while.