Last night Mickey Rourke was ringside for Wrestlemania 25.  As you can imagine, Rourke got some ring time and even laid the smackdown on Chris Jericho.  Sounds like fun.

Of course some folks will probably bash or at least question Rourke’s participation in “rasslin’.”  Not me though.  I say if Mickey Rourke wants to get in the ring and have some fun, more power to him.  The only thing that would have made it better is if he’d have won the Oscar!

Although I loved professional wrestling when I was a kid back in the 60’s and early 70’s, I haven’t regularly watched it since my sons lost interest more than a few years ago.  Still, I enjoy seeing clips of old matches/interviews and reading biographies of professional wrestlers.  You wouldn’t believe some of the stories — and that’s just the ones that they’ll share!

Here’s a bit of trivia:  Did you know that “Stone Cold” Steve Austin is set to co-star with Sly in The Expendables and Terry Funk had featured roles in Sly’s Paradise Alley and Over the Top?

The Overview: Randy “The Ram” Robinson is a washed up professional wrestler hoping for one last shot at the big time, a romance with an aging stripper and a reconciliation with his college-age daughter.

The Good: Mickey Rourke.  Maresia Tomei. Both received well-deserved Oscar nominations.  And let’s not forget writer Robert Siegel and director Darren Aronofsky.  The behind-the-scenes before and after the matches stuff.  The movie feels real.  There is no sugar-coating motivations or easily resolved situations.  Did I mention how good Rourke and Tomei are?

The Bad: The “hardcore” match.  Robinson’s relationship with his daughter.  Getting old.

The Ugly: Did I mention the “hardcore” match?

The Summary: I went in to see “The Wrestler” expecting a lot.  I wasn’t disappointed.  It deserves all the honors it is getting thanks to the efforts of Rourke, Tomei, Siegel and Aronofsky.  I look forward to watching this again when it’s in my collection.

I work as an Assistant Principal at a local high school.  A while back I posted about talking to former World  Lightheavy Weight Champ, Antonio Tarver at one of our basketball games.  Tonight I was working the game as our girls basketball team played for the district title.  Kevin Nash [movie actor and professional wrestler] came to watch.  Nash is friends of the family of one of the players.

What was cool was that many people recognized him, but no one went over for autographs or to talk to him.  Kevin Nash wasn’t there for that and people seemed to realize it.  A group of students did walk by to get a closer look, but even they didn’t bug him.  Too bad that most celebrities aren’t given the same respect when they are trying to enjoy some time away from the limelight.

Unfortunately our girls lost.  The good news is that coming in 2nd place in the district moves us into the regional tournament with a chance to still go to state.  If we make it, maybe Kevin Nash will make a return visit.

While it’s true that this trailer for “12 Rounds” starring WWE wrestler, John Cena, looks like it will be a “by-the-numbers” action movie, it’s also true that it looks like it might be a fun way to spend a couple of hours. 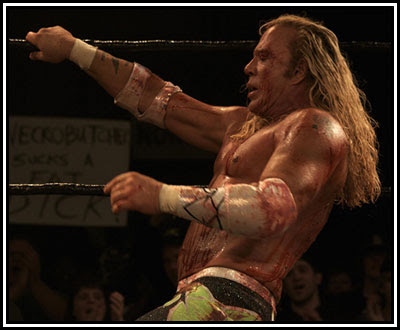 Advance word on “The Wrestler” has been so good, it’s scary. After seeing , I’d have to say that the hype is well deserved. Today we have a short clip that you have to see to believe. It’s from an old wrestling match that paired Terry Funk with Cactus Jack aka Mick Foley against some mugs that they’d beaten. Funk and Jack decide that their opponents need a little more hurt and so they ask for some chairs from the crowd. Big Mistake!
You can see that Funk and Foley, er, Cactus Jack are shocked at the number of chairs being hurtled into the ring. They move to opposite corners and begin to yell/signal for fans to stop. At just before the 1:30 mark a chair grazes Funk and he stays in character. Too funny!
Watch it here and remember, be careful what you ask for… Next Sunday, December 9th, my buddy John Beatty will be one of the guests at the Epic Comic Con in Orlando, Florida. He’ll be there along with a bunch of comic book artists, professional wrestlers as well as a couple of actors and authors. Talk about an interesting mix!

John will be sketching and signing autographs. I’ll be there hanging out as well. If you’re in the area, plan to drop on by! I was never much of a fan of women’s wrestling. Even when I was a kid and lived and breathed pro wrestling, I didn’t care about the women mixing it up in the ring. Of course back then we didn’t have the divas or the bathing suit matches, etc. Still, the one woman wrestler that I did know was the Fabulous Moolah. It amazed me that despite the country being broken up into territories, with each having their own champion, Moolah was recognized as the Women’s Champion everywhere.

Mary Lillian Ellison aka The Fabulous Moolah was born in 1923 — the youngest and only girl of 13 children. Her mother died of cancer when she was just 8. Mary attended weekly pro wrestling cards with her dad and perhaps that’s where he love of the sport began.

To be honest, I really didn’t like most of the angles that the WWE used with Moolah when she came back in the late 90’s. Still I admired the fact that at her age she was still able to get out there and take bumps and that her name still got a rise from the fans.

So despite the fact that I wasn’t a fan of women wrestlers, I felt it right to pay my respects to a performer held in such high regard in the “sport” that I loved as a kid. Rest in peace, Moolah. My thoughts and prayers go out to her family, friends and fans. According to a Sports Illustrated report, Evander Hollyfield is just one of many professional athletes linked to a nationwide steroids investigation. Several professional wrestlers including Randy Orton, Adam Copeland, a.k.a. “Edge,” and Shane Helms, a.k.a. “The Hurricane,” Kurt Angle, Oscar Gutierrez aka Rey Mysterio join other pro athletes such as Jose Canseco, John Rocker, Jerry Hairston Jr., David Bell, and bodybuilder Victor Martinez on the list. You can read the full story HERE.
Honestly, the only name on the list which really surprises me is Hollyfield’s.

It never ceases to amaze me the things that can discover on Youtube.com. I’ve found everything from clips from old Sammy Terry shows to news about a fire that took out much of the downtown in my home town of Terre Haute back in the early 60’s. I’ve found intros to tv shows that I haven’t seen in 40 years and fan made trailers as good as what you’d see in theaters.

Today I found video of a wrestling match that took place in the early 70’s pitting The Blackjacks [Mulligan and Lanza] and their manager “Pretty Boy” Bobby Heenan against Dick the Bruiser, his cousin The Crusher and midget wrestler “Little Bruiser.” What makes this match so appealing to me is that in addition to it being over 30 years old, and featuring my favorite wrestlers of the time, I actually saw this match live!

Well, maybe I did. See, I did see these same guys wrestle each other in Indianapolis live, but they probably wrestled against each other around the country and the video may have been from one of those matches. Either way, it was still a hoot seeing it after all of these years.

I’ll continue searching out Youtube for cool videos. I’d love to find intros to “T.H.E. Cat” [I can’t imagine that it was good as I remember it being] and “Garrison’s Guerillas.” Hey, and if you find any cool videos, post the links here. I’d love to see what gems you’ve come across.

One of the things that I love about YouTube.com is that you can find video of almost anything. I was surprised when I found a classic pro wrestling match between “Pretty Boy” Bobby Heenan [accompanied to the ring by Blackjacks Mulligan and Lanza] and “Cowboy” Bob Ellis.

I was even more surprised when I discovered video of Sammy Terry! I first told you about Sammy way back here. As host of “Nightmare Theater,” Sammy was on the air from the early 60’s through the 80’s. Although this clip is from 1987 [near the end of Sammy’s run] it will give you a taste of why I loved staying up until 11:30 on the weekend to catch Sammy hosting a horror movie double feature.

I’m really surprised that some network doesn’t have a weekend horror movie double feature hosted by someone like Sammy. My guess is that if kids didn’t tune in, there’d still be a good-size audience of folks like me!

When I was growing up in the midwest in the late 60’s and early 70’s I was a huge pro wrestling fan. My favorite tag team wrestlers were The Blackjacks [Mulligan & Lanza] with manager “Pretty Boy” Bobby Heenan.

Sometimes Heenan would even get involved in matches [usually against his will]. If you watch today’s video you’ll see a match where Heenan was signed to wrestle crowd favorite “Cowboy” Bob Ellis. Despite the fact that Heenan had recently busted his knee, he went down to the ring on crutches to seek a short postponement… of maybe six or seven months… click below and you’ll see what happens when the match is forced to go on.

WWE‘s pay-per-vue, Unforgiven, was held last night. My sons, nephew and I were able to watch it from the comfort of the local wing house, and we had a blast.

It’s suprising that although everyone knows that wrestling matches are pre-determined the sport is as popular as ever.

Rick Flair, the guy in the pic to the left, is currently my favorite wrestler. Flair‘s 56 years old and still puts on a great show. The highlight for me is when he does his patented “front fall.” If you’ve ever seen Flair wrestle, then you know what I’m talking about. The Flair “front fall” alone is worth the price of admission.

If you’re a wrestling or Rick Flair fan, then you might want to check out his autobiography, To Be the Man. It, too, is worth the price of admission.

Randy Orton is the young guy next to Flair in the picture. The kid is a third generation wrestler [I used to watch his dad wrestle when I was a kid]. Although he lost his title tonight, he has a bright future.

I could give you a rundown of the matches, but if you’re that interested, you’ll probably watch RAW tonight and I don’t want to spoil it for you. And wrestling isn’t really about who wins or loses anymore… instead it’s about how good the performance was.

And as I said, we had a blast.

Brock Lesnar, touted as The Next Big Thing in the WWE, a legitimate National Champion in college and a 3 time Champ in the Pros has walked away from his multi-million dollar contract to try out for the NFL.

And while Brock is big enough, strong enough, and even fast enough to make it in the NFL, he has an uphill battle to get picked up since he hasn’t played in nine years and the last time was on a high school team.

Still ya have to admire a person willing to turn down millions of dollars to pursue a dream.

No Time to Die